In 2017, the Barossa Wine Auction has introduced the Seal of Provenance in response to bidders and auction houses growing demand for the wines in the auction to be authenticated as coming direct from the cellars of the winemaker.

The Barossa Wine Auction Seal of Provenance is uniquely part of the individual wine’s chain of custody, protecting the security and integrity of the bidder’s investment. 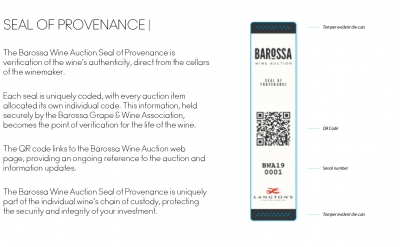 The Seal of Provenance has the following features:

“Following feedback after the 2015 Barossa Wine Auction, that bidders valued an auction sticker that identified wines as being purchased at the auction, Barossa Grape & Wine Association partnered with Multi-Color Australia to develop the Seal of Provenance. The brief was to develop a seal that would act as a sign of authentication as well as allowing for traceability and the sharing of key information about the wine and the auction. We are very excited to now be applying these seals to every bottle of wine being auctioned, giving bidders confidence in the provenance of their purchase.”
Annabel Mugford, Barossa Grape & Wine Association

“Traditionally, the security and integrity of wine has largely been via the choice of closure and the complexity of the packaging, as a deterrent to counterfeiting. While this remains as important as ever, as the unscrupulous become more sophisticated, new layers of security are necessary to ensure the integrity of high value wine assets. We are delighted to partner with Barossa Grape and Wine Association and Langtons in supporting the provenance and authenticity of the Barossa Wine Auction.”
Andrew Holt, Multi-Color Australia

“Wine buyers are looking for assurance when they buy a bottle of fine wine. The Barossa Wine Auction Seal of Provenance gives buyers confidence that what they are buying is genuine in both quality and origin.”
Tamara Grischy, Langtons

The Barossa Wine Auction is run by BGWA as a key event within the program of the Barossa Vintage Festival, the longest running wine festival in Australia. In 2017 lots will be auctioned online from 7 to 21 April and the live auction will be held at a special lunch event, in Barossa, on Friday 21 April, 2017. The auction will feature rare vertical collections of back vintages, as well as large format and special releases from 59 of Barossa’s most prestigious and distinguished wineries, with a total of 159 lots available online and an additional 30 lots available at the live auction. Lots are valued from $40 up to $54,000, with wine to appeal to everyone from casual wine drinkers to connoisseurs and investors.

Read more about the Auction