Gathered around the kitchen table at the home of Margaret Lehmann, we were treated to a special and unique tasting on a Saturday morning. It was the first time that Margaret had lined up a selection of wines at the same time, made by husband Peter and boys Dave and Philip. Lisa Perrotti-Brown was in town as a guest judge for the Barossa Wine Show and was also  invited along to taste through these marvellous wines that spanned 6 decades.

Taking this story back a couple of years it is important to explain how we arrived where we were, delving into the private cellar of the Lehmann cellar. Several months prior to Peter’s death, Peter and Margaret realised they had far too much wine in the family’s cellar. Even putting aside a large collection of wines for future generations stocks were surplus to the family’s needs. And let me tell you, the family can drink. Peter posed the question to the family ‘what are we going to do with the cellar’. It had grown into an unruly vinous library, documenting some of the great Barossan wines made over the last half of the 20th century. The Lehmann family are known for their absolute generosity and Dave quipped ‘perhaps we can do something all altruistic and give the lot away’. Peter’s response was ‘no way. This was not said in an uncharitable way and the family have given so much back to the wine community over the years. Over the past 18 months Margaret has donated many bottles of rare wine so as the new generation of local winemakers can experience Barossa wines made in a different era and get a feel for the ultimate ageability of the wines from our special region. The answer was to give the cellar to Heidi and myself to re-catalogue, triage and re-cork the wines, offering a portion for sale to the general public.

The tasting was conducted with a relaxed air. This was the place the boys grew up in and the boys were right at home. You could feel mum’s pride beaming as we worked through the wines. Dave was in particularly good form, explaining to LPB that one of the wines was like ‘Spakfilla’ in the mouth. We had to explain to LPB what Spakfilla was. ‘It’s about right you’re not in marketing’ was her response to him when he openly canned one of his own wines. But that is the Lehmann way, absolutely no bullshit and heart beating loudly and proudly on the extremity of the sleeve.

We kicked off the tasting with ten wines made by Peter Lehmann. Marg explained that most of the fruit for the wines would have been grown around Light Pass, Angaston and  Eden Valley sub regions.

1964 Saltram Bin 38 Shiraz Tokay: This is one of the most deliciously complete red wines I have had the pleasure of drinking. The nose is warm and inviting and draws the drinker in. You get notes of sweet chocolate, earth and meat. It is full and ripe with a palate that is spun from vinous silk. There are no hard edges and tannins are completely resolved yet the wine is still fresh and very much alive.

1971 Saltram Bin 88 Shiraz: A little shy on the nose to begin with. In the mouth there’s a core of sweet blackberries. It is a dense wine with real lusciousness on the palate. As the wine breathes there some bacon fat (Schultz’ of course) and a suggestion of tar and liniment. Length of flavour is superb.

1972 Saltram Hydraulic Press Shiraz: Has some balsamic lift to the nose. It is lightly smoky with plenty of cassis and cherry fruit. In the mouth it is clean and direct with good depth and concentration. It really builds through the palate.

1973 Saltram Hydraulic Press Shiraz: There’s a minty coolness as it shows some eucalypt and tobacco leaf to the aroma. It is rich of fruit and quite dense and chewy. It has a touch of chocolatey development and tannins are chalky with the wine possessing a chewy, sinewy finish. I very much like the vibrancy of the wine.

1975 Saltram Bin 88: I suspect this was from Eden Valley fruit and the wine reminds me of an aged Hill Of Grace. It is complex with whiffs of wild sage, mint, smoked meats and Christmas cake spice. It is elegant and beautifully balanced. A strand of licorice weaves through the flavour profile and tannins are gentle but sneaky, drawing the finish out and leaving a pleasurable savoury footprint once the wine is swallowed.

1978 Masterson Shiraz Cabernet: This had a heart of blood plum fruit and a sprinkling of salt. Sadly there was some TCA that marred the wine. If you look carefully through the TCA, you see….more TCA. I have had much better bottles.

1984 Anders Lehmann Schahinger Shiraz Cabernet: The only one of P.L’s wines to show any oak. You get the scent of coconut and vanilla on the nose coupled with warm berry fruit. It is fresh, dense and chewy. Remarkably youthful for a 31 year old wine. There’s some dark chocolate notes and acidity is bright and breezy.

1969 Saltram Vintage Port: Now I have a veritable plush pile Berber carpet on my chest but this thing put hairs on those hairs. It is a monster! P.L had a preference for a fortifying spirit that was slightly raw and boisterous and the nose here has all of that smoky, dirty spirit complexity. It has so much going on with aromas and flavours of licorice, sweet fig, chocolate, raisins and brown sugar. It is round and intense, tasting like Christmas pudding and with absurd length of flavour.

Saltram Sweet White Show: One of the greatest fortified wines I have ever put in my mouth. Average age of the material was 35 when it went into bottle in 1972. It has that khaki green colour that indicates a serious amount of time spent in wood. The nose is an amalgam of salted caramel, honey, crème brûlee and toffee. It is so rich, sweet, complex and intense but not sickly or cloying. It fills every crevice of the mouth with luscious nectar and there’s a suggestion of Indian spices on the extraordinarily long finish.

The palate needed a quick freshen up before launching into more reds and Dave and Phil obliged with a few whites and Rosé wines.

2015 Vickery Eden Valley Riesling: This is just so fine and direct. It has an aroma of bath salts, citrus blossom and dried flowers. It is full and fruity finishing with an almost audible chalky snap.

2014 David Franz Eden Valley Riesling: Smells of orange blossom and rockmelon with a little floral spice. It is full and flavoursome, loaded with citrus fruits and possessing a finish that is gently phenolic.

2014 David Franz Long Gully Rd Semillon: This is off a 130 year old, dry grown vineyard. You feel the old vine sap to this wine. It is ripe with notes of lemon, butter and spice. There’s good intensity and the palate is rich, pulpy and mouth-filling. It really is one of the truly great wine bargains given that it retails somewhere south of 25 bucks.

2014 Brothers Ilk Chardonnay: Pure white peach fruit with a little nectarine and fig. It has a fruit sweet heart and good shape. Acidity is relatively gentle.

2015 Hesketh Barossa Valley Saignée Rosé: This is essentially bone dry, but there is a perception of sweetness from the fruit. It has a jube-like quality and there’s smoky mineral lift to the aroma. It is full, round and flavoursome and I suspect it will still show plenty when iced right down over the warmer months.

2014 David Franz Red Rosé-107 Varieties: It is made from 107 varieties from the western Barossa and I doubt we have seen a better hundred made in the Barossa since ‘Boof’ Lehmann played in the local cricket league as a junior. The base for this wine is a tonne of fruit off the 1923 planted Stonewell hill block. In an effort to convert this tonne into a ton, a truckload of grapes from Kevin Bartsch’s nursery production grapes was added, taking the number of varieties used to 107. The resultant wine is a beauty. Possessing a vibrant red hue and a nose dominated by the aromatic varieties in the blend. It is fruit sweet, dense and complex for a rose but by no means heavy.

2014 St John’s Road ‘Blood & Courage’ Shiraz: Traditionally made in open fermenters but possessing a high degree of polish. There’s some cherry and raspberry fruit and plenty of spice. It is fresh and juicy with good generosity and a finish punctuated by meat and earth.

2014 St John’s Road ‘Block 8, Maywald Selection’ Shiraz: Weighs in at just 12.7% alcohol but no shortage of flavour here. There’s a grinding of black pepper through the ripe blackcurrant and blackberry fruits. It is full and glossy in the mouth and there’s a rigid graphite spine supporting all of the wine’s fleshy elements. It finishes bright and energetic and is very long in the mouth.

2014 St John’s Road ‘Block 3, 1935 Planting’ Shiraz: This is a fair bit riper and quite deeply pitched. Black fruits are trimmed with spice and there’s a shot of espresso from the oak. It is dense with pleasant floral nuance. There’s black olive saltiness to the finish.

2010 David Franz Alexander’s Reward Cabernet Shiraz: Dave unashamedly believes in giving Barossa Cabernet American oak treatment and the 75% Cabernet in this blend has seen some high quality Yankee wood. You get vanillin smells from it that work well with the cassis fruit. There’s some sweet tobacco and smoked meat flavours. It is a warming, generous, old fashioned red wine with plenty of character.

2010 Georgie’s Walk Cabernet Sauvignon: The Barossa is famous for Shiraz but boy Cabernet can be exciting. This is a belter. So soulful and warming. Loads of fruit tempered by savoury elements. Good size but everything is in proportion and it has exquisite balance. Should live for decades.

2010 David Franz Alternative View –F.A 600 Shiraz: What does the F.A stand for? Why ‘Fucking Awesome’ of course. This is, in Dave’s own words, ‘the big, jammy, silly wine’. It is big and jammy but not silly. I know plenty of blokes who’d love to wash down a 1kg Tomahawk steak with it.

Like so many of the great wines around the world, the three sets of wines we tasted here are very much a reflection of the personality of the person who made them. Dave’s wines are bold, brash, edgy and wild. Phil’s show more polish and restraint but express their terroirs with perfect clarity. P.L’s are legendary: timeless wines that are full of fruit and character and wines that have and will leave a lasting legacy. All three make wines of soul, character and ultimately drinkability.

Some of the wines from Peter and Margaret Lehmann’s cellar are available for sale at www.dortodoor.com 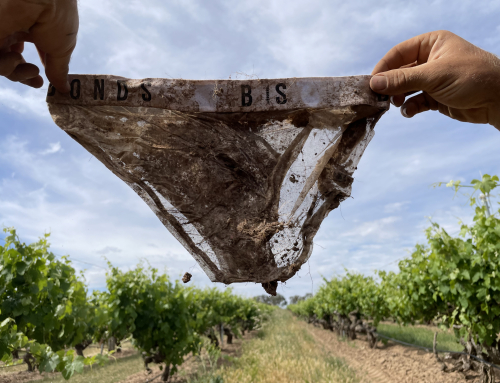